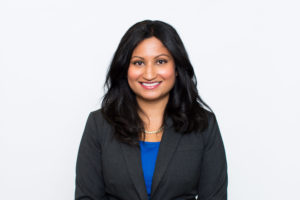 Ms. Navaratnasingham joined Phillips, Spallas & Angstadt, LLP, in 2015. Her practice includes the representation of companies and other entities in litigation involving claims of products liability and personal injury. Prior to joining the firm, Ms. Navaratnasingham was a civil litigator at Ferruzzo & Ferruzzo, LLP, in Newport Beach, California where her practice included the litigation of disputes arising out of breach of contract, breach of partnership agreements, commercial lease disputes, labor law and trade secret misappropriation.

While in law school, Ms. Navaratnasingham received the USA Funds Merits Scholarship; obtained the CALI Award for Professional Skills; was a member of the Phi Alpha Delta, A.L. Stephens Chapter, where she served as a Clerk for one term; and was a staff editor of the Whittier Law Journal for Child and Family Advocacy. During her time in law school, she also served as an intern with the Orange County District Attorney’s office.

During her undergraduate studies, Ms. Navaratnasingham received the Alumni Association Scholarship award, was a member of the Golden Key International Honour Society and the Pi Sigma Alpha Political Science Honor Society, and actively served as a volunteer with the local Red Cross and Care and Share Food Bank.

Ms. Navaratnasingham is a member of the Bar Association of San Francisco and is admitted to practice before all California State courts, the United States District Courts for the Central, Southern and Northern Districts, and the United States Court of Appeals, Ninth Circuit.